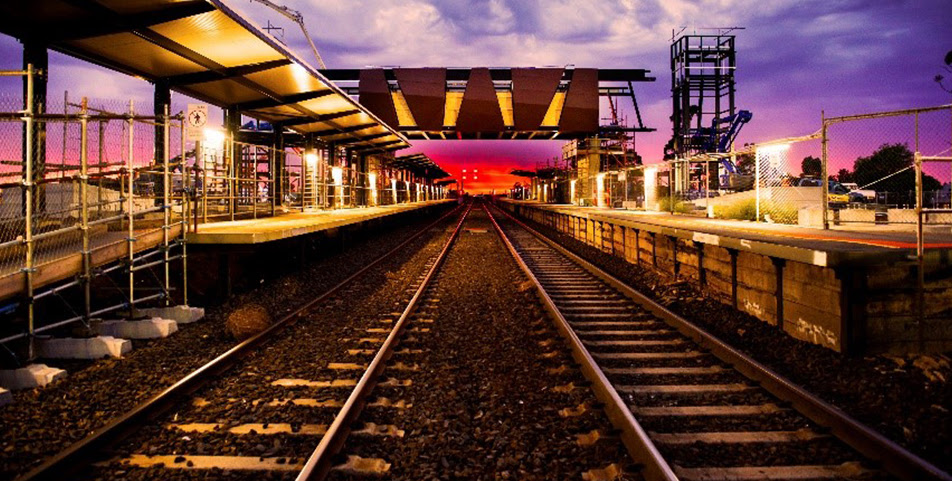 The Suburbs Set for Population Explosions

Over the Next 20 Years 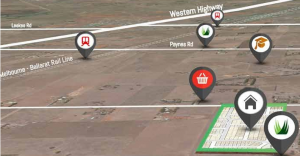 According to an article published in The Age by Craig Butt on 5th October 2019, as of 2016, Rockbank and Mount Cottrell, in Melbourne’s west, were home to about 3000 people but over the next two decades, the population there is set to explode – a twentyfold increase, based on state government projections.

By 2036, the area is expected to be home to about 65,000 people, equivalent to the current population of Shepparton indicating that Rockbank is set for a massive population boom. Rockbank/Mount Cottrell is one of 29 suburbs state-wide, the Department of Environment, Land, Water and Planning predicts will more than double in size between 2016 and 2036.

A total of 29 Victorian suburbs are projected to more than double in population size between 2016 and 2036.

Suburbs projected to more than double in size by 2036

A total of 29 Victorian suburbs are projected to more than double in population size between 2016 and 2036. 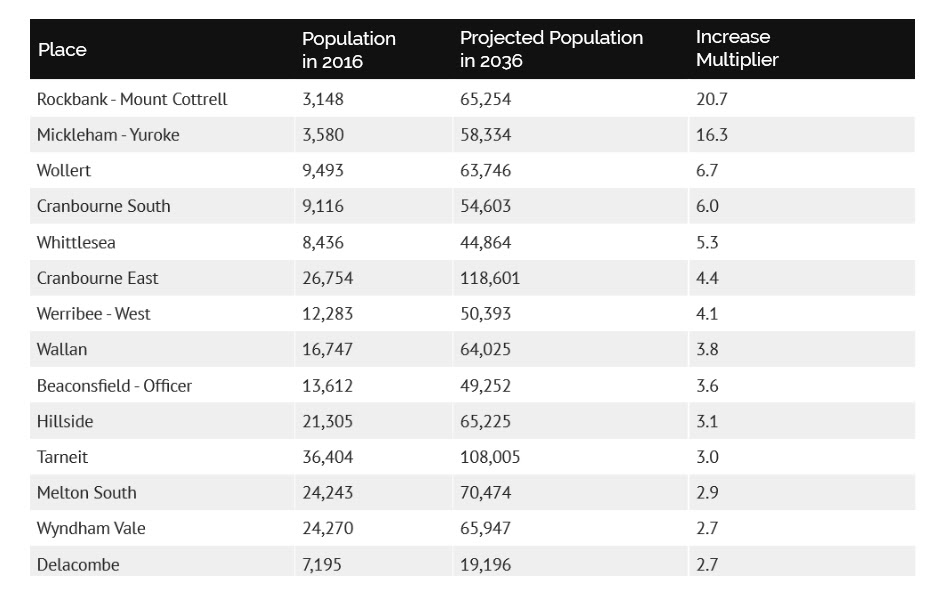 The department’s principal demographer, David Sykes, said these projections were calculated using mathematical models, expert knowledge and trend analysis to provide an estimate of the future size, distribution and composition of the population. RMIT professor of urban policy, Jago Dodson said that under these population projections the Wyndham municipality, which takes in Werribee, will have a population in 2036, equivalent to that of Tasmania. 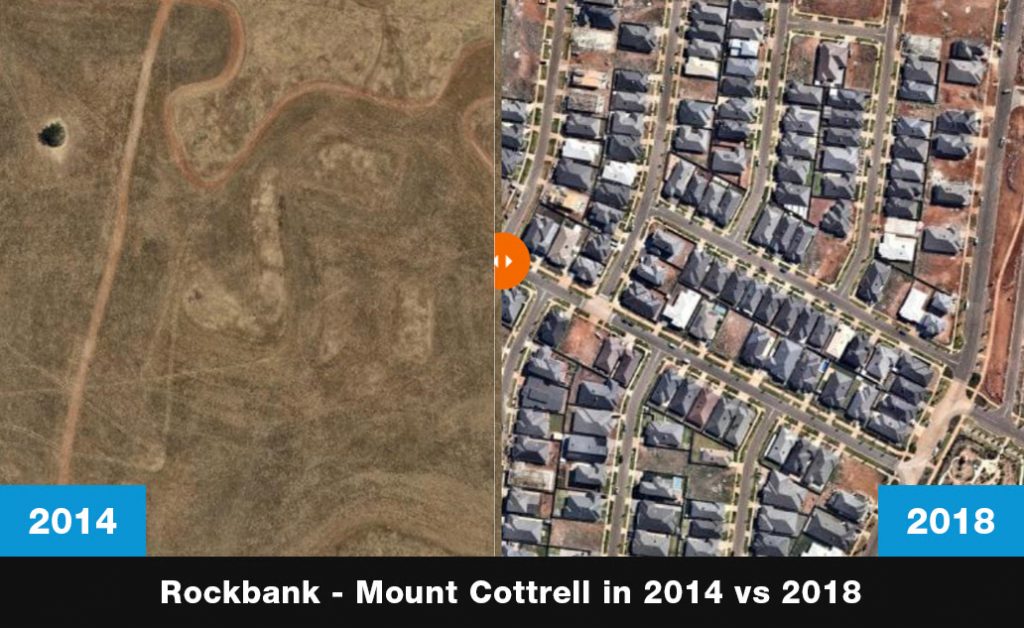 All in all, the state of Victoria’s population is expected to surge from 6.2 million in 2016 to about 8.7 million by 2036, reaching 11.2 million in 2056 and Melbourne is tipped to overtake Sydney as the country’s largest city around the middle of the next decade, with its population to grow to about seven million by 2036, and then cross the nine million mark in 2056.

The president of the Planning Institute of Australia’s Victorian branch, Laura Murray, said that regional Victoria had a lot to offer, and a national settlement strategy, incentives around affordable housing and new job creation, as well as better public transport infrastructure, would encourage people to move to these areas.

The Government is commencing the following works to ease traffic conditions, reduce travel time and make the overall area more accessible to the public on Leakes Road, between Derrimut Road and Fitzgerald Road:

Woodlea, within 1.2 km from our Plumpton site, is developed by one of the major land developers of Australia and boasts the following features: 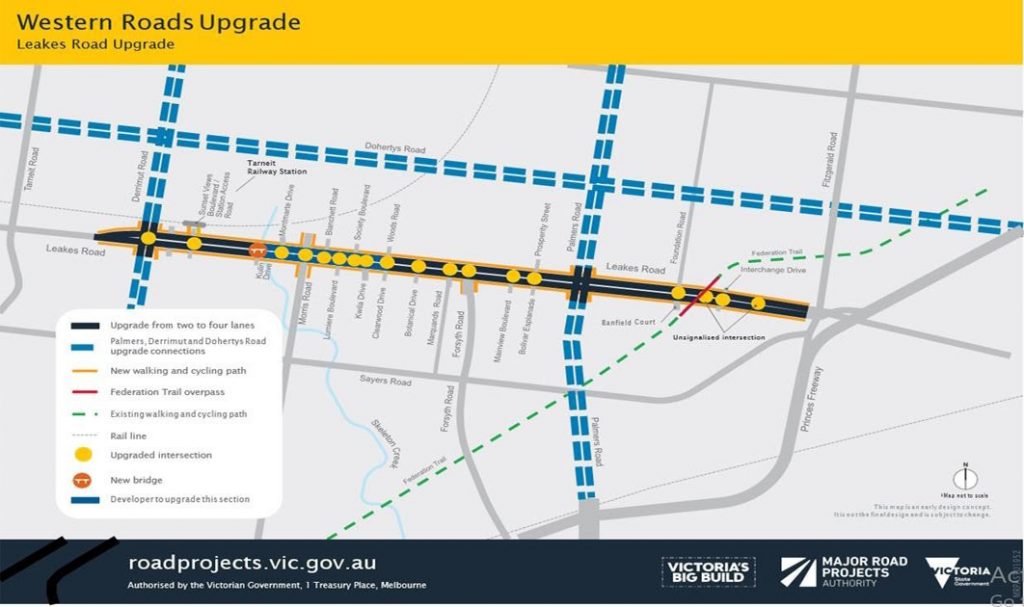 The first completed Rockbank train station upgrade of the project is modern and accessible and is ready to cater to Rockbank’s growing population.

The highlights of the upgraded Rockbank Station are: 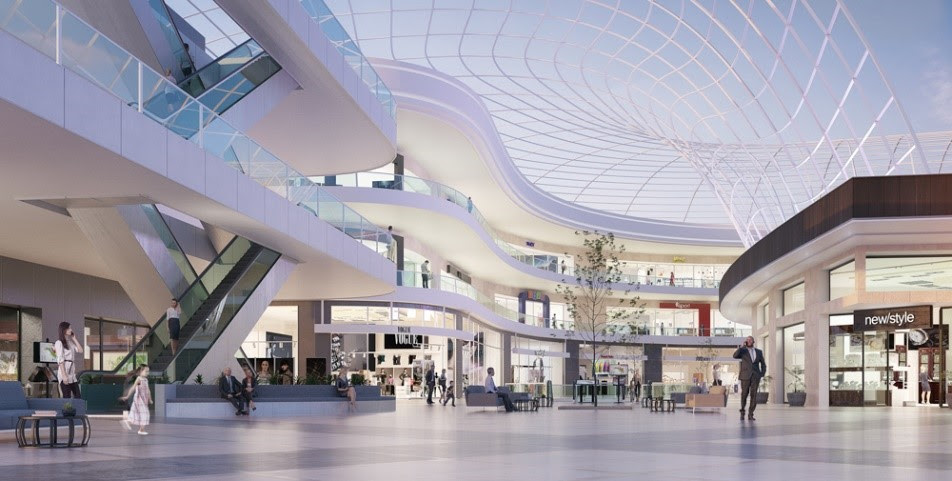 We are proud to announce that our sub division plan has now been approved by the council, thereby allowing us to now commence the process of structural designing all the while making sure that everything is in line with the planning permit issued by the Council for the respective site.

Furthermore, we are 12 months ahead of our overall schedule for the site which encompasses the following: 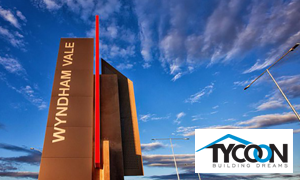 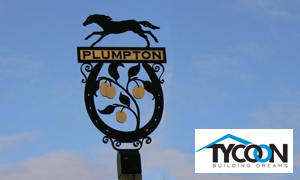